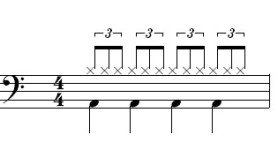 A Song For The Times

It’s a moderately cold, very windy day, and Winnie’s at work while I’m home vegetating between jobs. Meaning, I have way too much time to spend playing researching on the Internet.

Among my discoveries, I’ve located this wonderful YouTube video that combines Marxist-Lennism with American Redneck. Really.

This is a YouTube clip of a Finnish band named “Lenningrad Cowboys.” They are described as:

The Leningrad Cowboys is a Finnish rock and roll band famous for its humorous songs and concerts featuring the Soviet Red Army Choir.

Currently, the band has eleven Cowboys and two Leningrad Ladies. The songs, all somewhat influenced by polka and progressive rock, and performed in English, have themes such as ‘vodka’, ‘tractors’, ‘rockets’, and ‘Genghis Khan’, as well as folkloric Russian songs, rock and roll ballads and covers from bands as diverse as The Beatles, Led Zeppelin, and Lynyrd Skynyrd, all with lots of humour.

The Red Army Choir (Choir Aleksandrov) is a performing ensemble that served as the official army choir of the former Soviet Union’s Red Army. The choir consists of a male choir, an orchestra, and a dance ensemble. The songs they perform range from Russian folk tunes to Church hymns, operatic arias and popular music.
In 1991, The Red Army Choir participated in Roger Waters’ The Wall concert celebrating the fall of the Berlin Wall. They performed an anti-war song “Bring the Boys Back Home”.

Since the collapse of the Soviet Union, the Red Army Choir has continued performing, entertaining audiences both inside and outside Russia.

So there you have it. The Evil Empire meets Good ‘Old Boys. Enjoy

Moving On After Starting Fresh : Taking a new job right after starting one.
Christmas Vacation In Puerto Rico : A Christmas vacation trip to Puerto Rico.
Bringing In The New Year of 2018 : Ringing in the new year of 2018. may it be a better year than 2017.