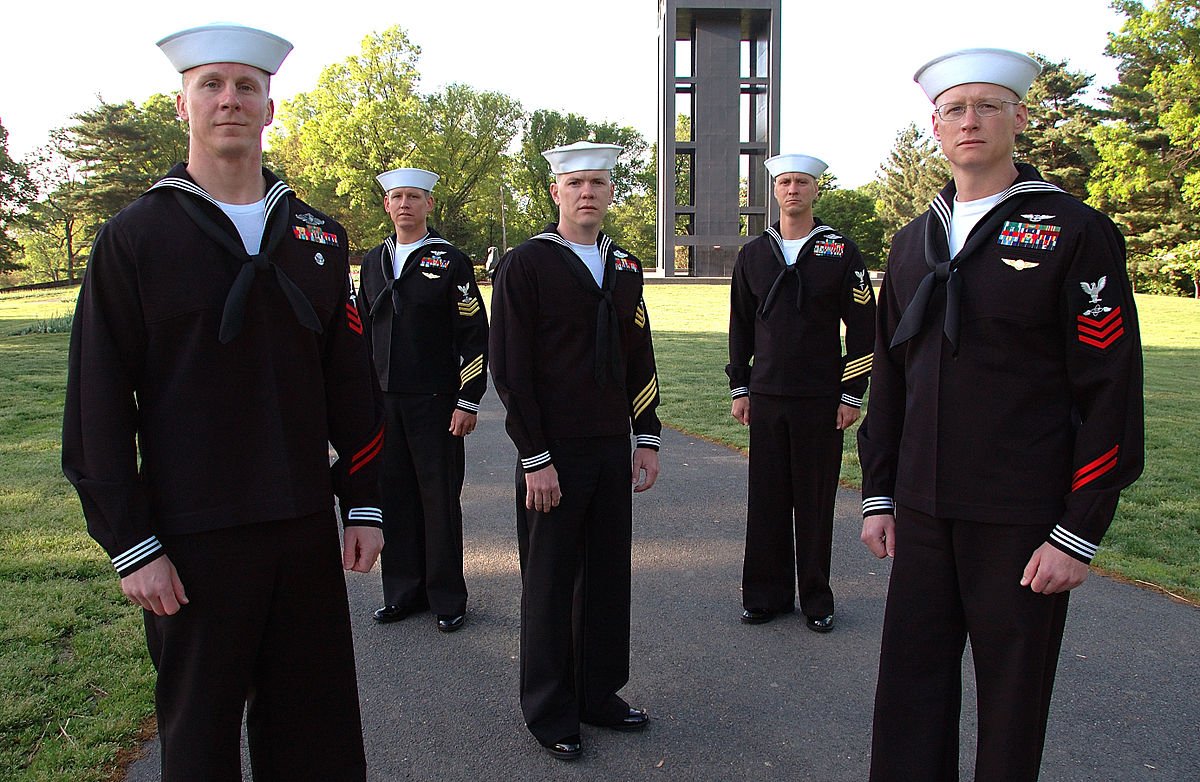 The Traditions Behind U.S. Navy Uniforms

Today I answered another interesting question on Quora: “Why are sailor suits made the way they are?” The question was too interesting to pass on, so I gave it a shot.  This turned out to be a question I really had fun answering. There are a lot of traditions behind U.S. Navy uniforms.

These uniforms are worn by enlisted sailors until they get promoted to Chief Petty officer, at which time they shift to a uniform similar to that worn by commissioned officers. The uniforms in the picture are “service dress blues,” which would be worn for ceremonial occasions or working in a job that requires being around the public or in a shore-based office.

First, the uniforms are folded inside out for storage which creates the unique creases. Even on today’s ships, storage space is limited and there isn’t much room for hanging uniforms. Uniforms were traditionally folded inside out to keep the outsides clean.

Next, the back flap. Until the early 1900s there were no haircut requirements for sailors, and sailors normally let their hair grow long. To keep their hair from getting caught up in the ship’s rigging or equipment they tied their hair back in a ponytail and dipped the ends of their hair in tar to hold it together. To keep the tar off their jumper shirts sailors started wearing a button-on flap, which being smaller was easier to wash. Especially when the sailors might only have one or two shirts anyway.

Fun fact; It was only in the early 1900s that US Navy sailors were required to cut their hair short, and only for reason of controlling head lice.

Next, the white strips known as “piping.” They started out as decoration, but starting about 1866 piping on the collar and cuffs were used to indicate rank, and some ratings wore shoulder insignia. Shoulder insignia indicating rank with chevrons was established in 1865, and rating badges were standardized and defined for all ratings in 1866. In 1876 the white piping on the collar was standardized to three rows for all enlisted wearing the jumper, with rank to be determined by the petty officer insignia and cuff stripes. Some ratings wore their insignia on the left shoulder and some worn them on the right.

In the US Navy an enlisted sailor is assigned a “rating” either at the time they enlist, or when they get promoted to Petty Officer Third class. Their rating indicates the type of work they do, and people within a rating effectively become a community of practice with shared interests and even a shared culture. The sailor’s rate is shown by the symbol on top of the patch (the one shown in the photo looks like an aviation rating as it has wings).

The chevrons (“V” shaped stripes on the shoulder patch) indicate the sailor’s rank. One chevron is a Third Class and add one for each rank up to First Class with three chevrons. The default color is red and if a sailor can go 12 years without getting into trouble they wear gold. The “hash mark” (angled stripe on the lower sleeve) indicates number of years service, each hash mark is four years.

The colored items on the sailor’s chest are their military awards commonly known as “ribbons.” Some ribbons will have a corresponding medal worn with full dress uniforms. The insignia above and below their ribbons is a warfare specialty, earned through an intensive qualification program. The most common insignia are surface warfare, submarine qualified, and aviation crewman; but there are several additional insignia for specialty communities (example: SEALS)

Next we have the neckerchief / tie. Reportedly, the neckerchief made its first appearance in the 16th century and was primarily worn as a sweat rag and to protect the sailor’s neck from rubbing raw from their stiff collared shirts. In some cases, the 36-square-inch silk fabric could also be used as a battle dressing or tourniquet in a life saving situation. In 1817, the Navy wanted each one of its sailors to tie their neckerchief the same way, so it introduce the square knot. The square knot was hand-picked because it was commonly used on ships to secure its cargo. The knot was later added to the dress blue uniform to represent the hardworking Navy tradition, and it remains that way today.

Then we have the famous 13 buttons on the flap of the uniform trousers. The modern zipper was only invented in 1913, so prior to that buttons were the only type clothing fastener. One legend is that the 13 buttons represent the original 13 colonies, but that actually isn’t true. In the early 1800s, the iconic trouser’s front flap (crotch area) or “broadfall” had 15-buttons before it was modified 90-years later to have just seven, allowing the manufacturer to reduce the amount of material. Reportedly years later, the broadfall was enlarged for various reasons including that many sailors didn’t have enough room down there, so the Navy listened and added the extra material and six buttons.

When I was active duty we had a saying “The buttons were thirteen chances for her to say no.”

On the latest uniform change trousers now have a zipper down the side, and the buttons with flap are only ornamental.

The uniform trousers have become famous for being “bell-bottomed.” In fact, the legs are not bell-bottomed but flared. This flared design was introduced for sailors in 1817 , so the men who washed down the ship’s decks would have an easier time rolling up their pants legs above the knees.

Last, but not least, the Navy’s famous “Dixie cup” hat, which is one of the most iconic symbols worn in the military today. According to the Blue Jacket manual, so-called “flat hats” were first authorized in 1852 and became the standard cover for sailors throughout the American Civil War. The flat hats were made from dark blue wool and commonly featured an embroidered headband of the ship name the sailor belonged to on the front of the brim. That feature ended in January 1941 to make it harder for adversaries to learn the what U.S. ships were in port. The ship’s names were replaced with a U.S. Navy embroidery instead.

In 1866, a white sennet straw hat was authorized to be worn during the summer months to help shield the hardworking sailors from the bright sunlight. But it wasn’t until 1886 where a high-domed, low rolled brim made of wedge-shaped pieces of canvas was written into uniform regulation. Eventually, the canvas material was replaced by a cheaper, more comfortable cotton. This option became popular with the sailors who wore them as they could bend the cover to reflect their individual personality — and still be within regulations

And last, the nickname “Cracker Jacks.” In the 1800s US sailors (merchant and navy) were nicknamed “Jack” (the way soldiers were nicknamed “Joe” during WWII). Sailors started calling their uniforms “Cracker Jacks” from an advertisements for the Cracker Jack snack, which from 1916 began to feature a uniformed Sailor Jack (and his dog Bingo), and the term was taken up by US Navy sailors themselves.

Here’s an excellent reference for the history behind Navy Uniforms:

Uniforms of the United States Navy

Edited: Mach 31, 2019 to correct details on piping and shoulder insignia

In the Navy Quora Re-Posts