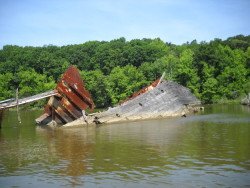 As I’ve been exploring the Potomac River by water, I’ve discovered some interesting spots and learned some interesting history. One spot that is rapidly becoming my favorite is Mallows Bay, on the Maryland side of the river, which is the location of the largest ship graveyard in the Western Hemisphere.

From the ever-wonderful Wikipedia: Mallows Bay :

The bay is the location of what is regarded as the “largest shipwreck fleet in the Western Hemisphere”and is described as a “ship graveyard.”

Charles County operates Mallows Bay Park […] contains the graves of more than 230 ships sunk in the river. Almost ninety were poorly constructed steamships built during World War I; in 1925 they were burned and scuttled in the bay. Bethlehem Steel then built a salvage basin during World War II to recover metal from the abandoned ships. The ships form a reef that hosts an array of wildlife. […]

The bay was listed as an archaeological and historic district on the National Register of Historic Places in 2015.

The park is billed as a popular for kayaking.  I had the opportunity to get over to Mallows bay yesterday with my kayak “Arrau” and do some paddling, and now understand why the park is so popular. Paddling among the remains of these old ships, and witnessing how they have formed a freshwater reef system, was absolutely fascinating.

I happened to catch the bay at low tide when many of the hulls are exposed, which increased the level of viewing. It also made paddling among the ruins a bit hazardous as I was snagged by pieces of wood and metal several times.  This is not the place for an inflatable boat!

In consideration of the meme “a picture is worth a thousand words” I’m going to save on words by posting some photos in a slideshow format of my latest kayaking adventure. Although this was my first trip to Mallows Bay, I can see future trips ahead (when I am willing to brave the nearly three hour drive).

Click on the image to advance to the next, or wait for the auto-advance. Hold your cursor (mouse) over the image for a description.

How Many Ships Do We Need? : Challenging a right-wing hack on end-strength of our Navy.
Fresh Catch of the Day : A momentous fishing trip to Solomons Island, Maryland.
Driving Back From New Orleans : One year after Hurricane Katrina made landfall along the Mississippi Gulf Coast, I drove back to Gautier from New Orleans along Highway 90, through the back roads.