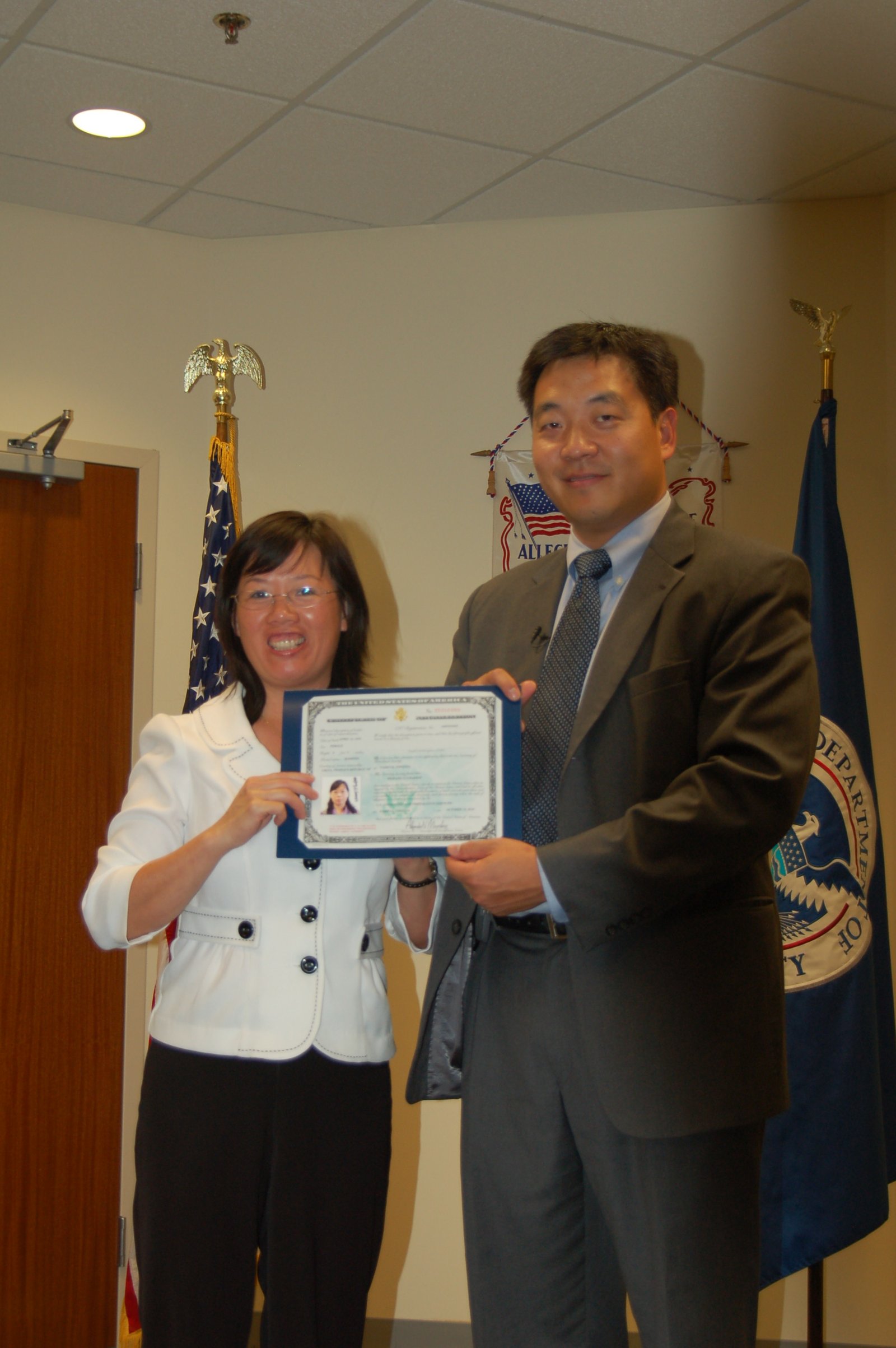 It’s been a long road for Winnie to get to today’s citizenship oath ceremony.  First it was the 20 month wait for her K3 visa just to enter the United States, to join her husband.  Then, it was the bureaucratic  goat rope getting all her residency documents together after she arrived in the US.  Dealing with hurricane Katrina six weeks after her arrival. Fighting with the Virginia DMV to obtain her Virginia drivers license which also proved that we were in fact legally married in the United States and the Commonwealth of Virginia.  Waiting a total 20 months to gain her permanent residency visa – the so called “green card.”

After all that, she had to wait the minimum three years from the time she gained her green card.  She had to improve on her English language skills to have a chance at passing her future citizenship interview through evening classes and practice.  Once she filed for citizenship back in May, she signed up for citizenship classes and attended classes three nights a week and Saturdays for May, June, and part of July prepping for her interview. When classes ended for the summer she had me help her continue her studying.  Once she received her notice for the interview, she prepped even harder.

Last Wednesday, October 6, Winnie had her citizenship interview.  She aced the test, and had all the documents needed.  Winnie was so prepared that the USCIS agent had to make up an excuse for turning her away by stating Winnie had used up all her time allotted for the interview, and would have to “come back later” to finish the interview.  She did, returning later that afternoon on a walk-in basis and getting the additional time she needed with her interviewing USCIS agent.  Defeated, the USCIS agent granted Winnie her oath of citizenship appointment for the following week (today).

We made a party out of Winnie’s oath ceremony.  Mom came down yesterday for the event and our Aunt Linda and Winnie’s friend Lili joined us.  We all trooped up to the Fairfax USCIS center by 1:00, worked our way through the security gauntlet, and ultimately were ushered up to the second floor “Oath Ceremony” room for the ceremony.  All the candidates taking the oath – 49 total – sat in the front of the room and all the guests sat in the back.

At 2:00 PM a USCIS officer came in and started the ceremony by explaining what would happen during the ceremony, then explained what the pending American citizens would need to do after the ceremony.  Those items included changing their social security status, filing for a passport, and registering to vote.

After this officer finished, she introduced the regional USCIS Division Chief as the individual who would be giving out the certificates.  The Division Chief gave a brief presentation and congratulated the candidates.  One thing that struck me was how both the first speaker and the Division Chief made wry  comments about the difficulties the citizenship candidates had endured to get to today’s ceremony, and made wry jokes that once completed they would never again have to deal with the USICS.

The division chief then had everyone stand, based on the country they were representing.  Of the 49 citizenship candidates, there were about 30 counties represented.  Two people were from China including Winnie.  Once everyone was standing the division chief administered the oath of citizenship, immediately followed by the Pledge of Allegiance.  I felt myself tearing while the Oath of Citizenship was administered.  After the oath and Pledge of Allegiance, we were treated to a videotaped speech by President Obama congratulating the new American citizens.  This was followed by a music video of our national anthem, then a music video of “Proud to be an American.”

We took our share of photos, then all five of us went back to Woodbridge for dinner.  Mom treated all of us at our favorite Chinese Buffet.

So, after seven years effort, Winnie has achieved her dream of becoming an American citizen.  I am very proud of her.

Winnie Gets Her Welcome!
This and That…
The Long Wait