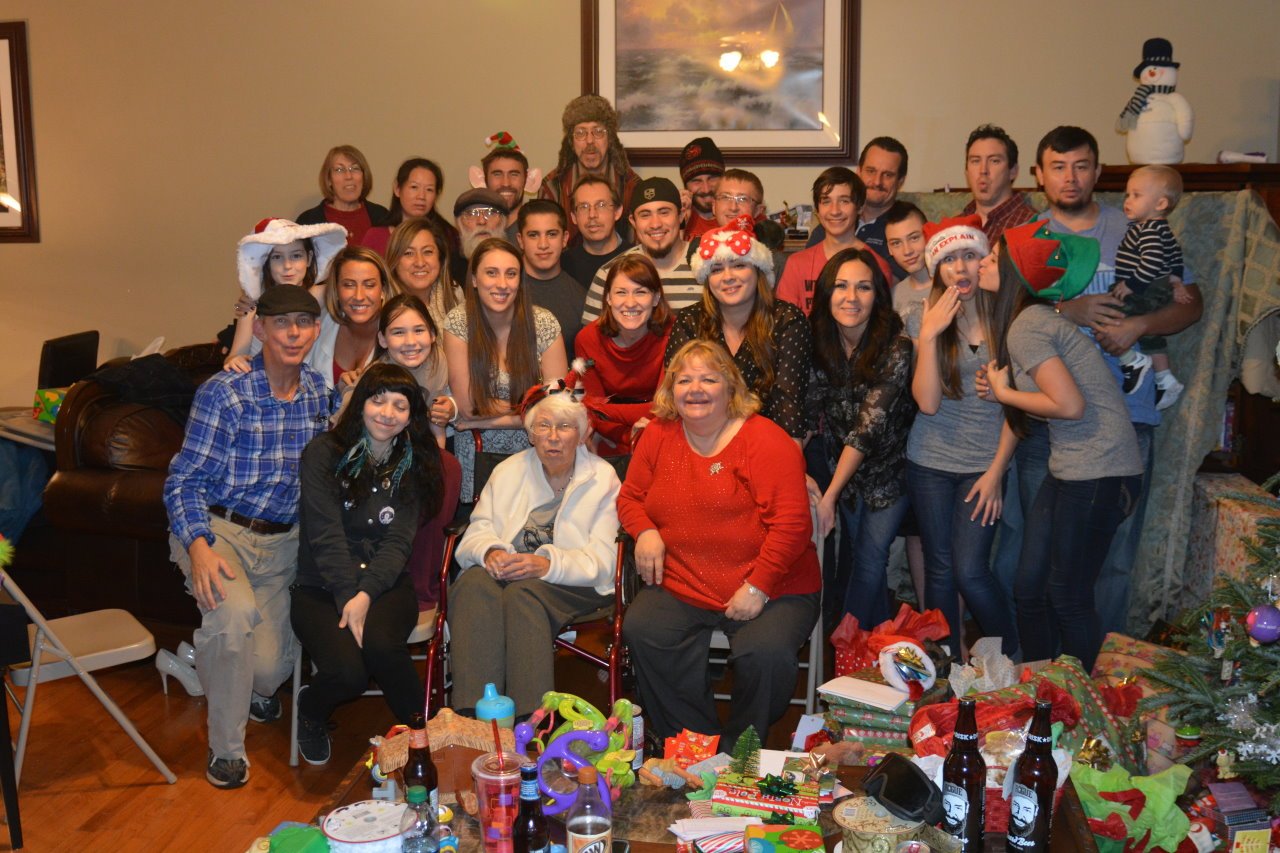 We had a very different Christmas celebration this year. In the past we’ve normally celebrated Christmas at home, with the exception of a few years in a row when we went up to Mom’s house in New York. Staying at home was the preferred option as the Charest family is currently spread out from Washington, California, Tennessee, Northern Virginia, and on out to Wales. However, this year the stars aligned and we all descended upon Tennessee for a very Charest family reunion Christmas celebration.

Mom moved down to Tennessee this past summer to be around my sister Melinda and her extended family. My brother Howard, with his wife Pam and daughter Katie, decided to fly into Tennessee for a few days over Christmas to visit. Then my other brother Jeff, currently studying at Cardiff, Wales, also announced he was coming back to the ‘states for Christmas. From there, it was a given Winnie and I would be coming down to Tennessee also.

We drove to Mom’s new house in McMinnville, Tennessee, Tuesday December 23. It was a pleasant 11 hour drive, but the time change to Central time caught us by surprise so we actually drove an hour longer than planned. By the time we arrived at Mom’s house Howard’s family and Jeff were already there. My sister Melinda and her husband Lazlo live right across the street from Mom and Howard and Pam was staying with her. Jeff was staying with Mom, so we all got together and had an intro reunion that evening. It was the first time since Dad’s funeral in 2004 that all five of us were together at the same time.

The next day, Christmas Eve, started slow with everyone sleeping late and then a lazy breakfast, then doing gift wrapping. About 10:00 Melinda, Howard, and Pam congregated at Mom’s house and we did the best Charest imitation of getting organized. Melinda explained that her daughter Melissa was hosting Christmas Eve dinner for all but didn’t know what time the party was starting. Winnie and I, along with Howard and Pam, needed to do a little last minute shopping. Mom and Melinda needed a few last-minute grocery items for their baking. So, after considerable discussion, we decided Winnie, Howard and I would go shopping while everyone else stayed behind doing other stuff. When we left at 11:30 we still didn’t know what time Christmas eve dinner was going to start.

We drove around the bustling metropolis of McMinnville (population 13,605 and most famous for it’s water tower) looking for stores. We finally got everything we needed about 2:30 and were deciding to head back when Pam called Howard. It seemed the Christmas Eve party had started at 1:00, we were already late, and anyway why were we gone so long! We headed back to Mom’s house, finished wrapping our gifts and signing cards, then convoyed over to Melissa and Eric’s house.

Christmas Eve with the Charest Family

Melissa and her husband Eric, along with their two children Eric and Alyssa, live on the outskirts of McMinnville not too far from Mom and Melinda. By the time we arrived most everyone else was already there and the last couple of stragglers arrived about 30 minutes later. By then, our family reunion/Christmas Eve party was pretty much in full swing.

Melissa and Eric are great hosts who know how to throw parties, and this was quite the party. We counted 30 people ranging in age from Mom at 87 to one year-old Uriah, Elizabeth and Bly’s son. Altogether, we had four generations of family.

Melissa and Eric had put together a non-traditional Christmas eve dinner of Mexican food and it was great. We ate, people mingled around and us out-of-towners got reacquainted with our family. I had seen most of my Tennessee Nieces and Nephews at February during the wedding of Melinda’s youngest daughter Abigail, but Winnie hadn’t seen anyone for a couple of years. While people ate I moved around taking pictures.

After everyone was finished eating, Renee, one of Melinda’s daughters, did her best drill-sergeant imitation of getting everyone organized for a family portrait. It took awhile as organization isn’t a particularly strong trait in our family. I set up my camera and tripod on timer mode while Renee herded people into position.  Once everyone was in place I took a set of photos with all involved displaying the proper levels of seriousness as suited the occasion.

After the photos the older kids started handing out gifts. There were plenty to go around as everyone had brought gifts for the rest of the family. We alternately watched people opening their gift and opening our own. The little kids of course had the most fun. No one was in any great hurry and with thirty people opening gifts it took a while.

After we opened our gifts we took some more photos of individuals and small groups. Then Melissa announced we were going to be treated to a Christmas Eve show that her and a few other ladies had put together. It turned out to be an enjoyable 30 or so minutes of lip-syncing, dancing, and costume changes to the movie music of “Frozen.”

It was approaching midnight by the time the show was over and most people started leaving. A small hard-core group led by Howard announced they were going to play a game of “Risk.” This was in keeping with the finest family traditions started many years earlier by Howard, who coincidentally normally won. Winnie and I headed back to Mom’s house and left Jeff behind to try his luck.

Christmas Day was another slow morning and late breakfast. We sort of had plans to visit property Melinda’s oldest son Terry had recently purchased, and then visit property Melissa had purchased nearby Terry’s place, but nothing was firmed up yet. About 10:00 events started to come together and by 11:30 Melinda, Jeff, Winnie and I were on our way to Terry’s property with Terry and family coming there to meet us.

Terry had explained his land was in a rural area, but rural means different things to different people. To this native New Yorker and life-long city dweller, rural means anyplace with cows. We started seeing cows right outside the McMinnville city limits and drove for another 20 minutes to the town of  Woodbury (population 2,680 with no water tower). We were supposed to meet Terry and family at the town’s only McDonald’s, but they hadn’t arrived yet and Melinda thought she knew how to get to Terry’s place so we kept on going.  We drove through Woodbury and turned off the highway onto a paved two lane road that quickly became one lane. The road took us past small homesteads with assorted cows, horses, goats, donkeys, and chickens, then came to a fork. One direction had a homemade street sign “Redneck Ridge,” and the other fork became a gravel road. Melinda wasn’t sure which way to turn, and I no longer had cellphone service to call Terry, so we waited.

Terry and family arrived a few minutes later and cheerfully waved as they sped by onto the gravel road. We followed. The gravel road quickly became narrower and looked like someone’s unkempt driveway. Then it became a dirt road. Terry stopped at a gate, unlocked it, and we kept on going. We finally stopped at a wide spot and parked. We all piled out of our cars, made our greetings, and Terry proudly pointed out the entrance to the cave that was part of his acreage. We got outfitted with flashlights and walking sticks, I grabbed my camera gear, and we descended into a nice limestone cavern.

We spend about an hour exploring underground. Most of the time we were walking in the stream running through the cave so by the time we got back out our non-spelunking grade shoes were pretty soaked. We regrouped by the cars, then Terry and Summer along with Winnie, Jeff, and I hiked out to explore the above-ground portions of their acreage while the rest stayed with the cars.

We spent another pleasant hour hiking around enjoying the beauty of this property. Terry and Summer showed us where they plan on building their house and showed us the final set of building plans. We made our way back down to the cars and said our goodbyes. Terry and family headed for home and we headed over to Melissa’s property.

Once back out on the main road we regained cellphone service and called Melissa to let her know we were on our way. Following Melinda’s somewhat erratic directions we drove back through Woodbury and made several turns onto progressively smaller roads until we arrived at another gravel driveway, then followed it to Melissa and Eric’s property.

Lazlo, Howard and Pam were also there and we spent some time driving around Melissa and Eric’s property in ATVs. I’d never driven an ATV before and it was an interesting experience. Melissa showed us a small pond tucked away back in their woods that was guarded by a large common snapping turtle, very much awake and watchful despite the winter cold.

By now it was getting late and my feet were freezing cold from being wet. Winnie and Jeff were in the same shape and we needed to get back while Melinda wanted to stay longer. So we made our goodbyes and headed back to Mom’s house.

Once back we dried off, warmed up our feet, and helped Mom get Christmas dinner prepared. Melinda, Lazlo, Howard and Pam all arrived about 6:00, just as the food was ready. We finished out our Christmas Day eating and talking.

Friday Melinda played tour guide, taking us up to the Hurricane Bridge recreation area by Center Hills Lake, back down along Carney Fork River to Rock Island State Park and back to Melissa’s house. Another game of Risk was in full swing so Winnie, Melinda and Pam picked up Mom and went out for pedicures and hair-dressing while I hung out at Melissa’s place watching players slowly get squeezed off the Risk board. later that evening we all regrouped in Murfreesboro for a late showing of “The Hobbit: The Battle of the Five Armies.”

Saturday morning Winnie and I packed up and were back on the road at 8:00AM heading for home .

So Christmas 2014 consisted of a family reunion, spelunking, hiking, driving ATVs, exploring central Tennessee, and watching the final installment of “The Hobbit.” Along with lots of eating and talking and gift-giving and playing Risk. All-in-all, this was one of the better Christmases I’ve had.

A Few of My Favorite…Christmas Songs : Listing my favorite Christmas songs, in no particular order.
And A Very Merry Christmas to All! : Welcoming in another Christmas celebration.
This and That, Christmas 2017 Edition : Catching up on all the Christmas news.