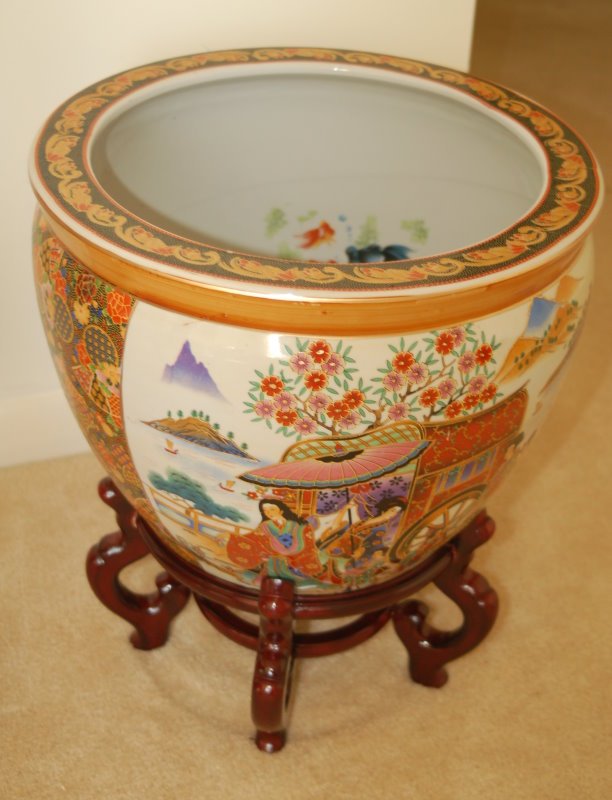 So Long…To All The Fish*

Well, we had another small experiment not work out so well this past week. A little smaller scale than trying moped commuting, but still an experiment. This time, we tried keeping goldfish in traditional Chinese style.

Winnie is a real difficult person to buy gifts for. She really does not want a lot of “stuff” in the house. While it’s easy on my wallet, there are times I really want to get her something she’ll enjoy. Times like Christmas, for example.

This Christmas, Winnie did not like the gift I selected for her on grounds she had no need for it. It was an item I purchased at a Chinese general import shop downtown Washington and the shop only gives exchanges, not refunds. So two weeks ago, on Winnie’s Sunday off, we headed to Washington. At the shop Winnie spent about an hour negotiating an exchange for in-store credit. All in Chinese, of course – none of the shopkeepers at this store speak much English. Watching the negotiations was worth the trip all by itself.

So, credit slip in hand, Winnie went shopping. After a bit of decision-making she first selected two 10 gallon Chinese ceramic pots. There was still credit left, so then she selected some smaller flower-sized pots and finished up with a lot of small food items and trinkets. Yes, this little store carries everything from large Rosewood furniture to trinkets, dried foods and medicinal herbs.

So, anyway, we now had two 10 gallon Chinese ceramic pots that we needed to do something with. One, a black pot, was easy; Winnie had a corn plant we hauled up from Mississippi that had outgrown it’s Mississippi planter, and the Chinese pot was just the correct size. The other pot was a little more difficult. This one had illuminations of Chinese goldfish on the inside of the pot and the glazing was about as pretty inside as outside. So, after a bit of discussion, we decided we’d put actual live fish in it.

Winnie said that keeping fish in a large pot would bring good luck to a house. I’m all for acquiring good luck anyway I can, so I was in full agreement to the fish plan. During the week I prepped the pot by filling it with water. Last Sunday, along with our other shopping, we went by the local Petmart and selected six tiny goldfish barely larger than feeder fish. Armed with the fish and a tube of fish food, we headed back home. After giving time for the fish-transport bag to float around the pot, we let the fish out into their new home. I showed Winnie how to feed them, and all was well.

At least, all was well for the first few days. I don’t know if the luck in the house increased, but after a few days I could tell the luck of the fish was not good. The water was getting stagnant and cloudy a lot faster than I expected. The fish were not moving around much, and when they did they kept pretty close to the bottom. By Friday evening one had already died.

By Saturday morning it was obvious we’d need to do a complete water change. Winnie decided I was the logical choice to change the water; I’m not sure how she came to that conclusion. Anyway, she headed off to work and I added fish-water-change to my Saturday To-Do list.

Late morning I poured out fresh water into a large bucket and let the water sit for a while. When it seemed like the new water was room temperature, I scooped out the fish and moved them into the bucket. Then I scooped out all the old water, wiped out the inside of the fishy pot, and poured fish and fresh water back in.

Within three hours, all five remaining fish were dead. When Winnie returned home I announced the sad news, but she did not seem too broken up. After a very short discussion, we decided there would be no more fish in the pot.

So now we have a nice but empty ten gallon Chinese ceramic pot on a stand. I’m sure we’ll come up with some innovative decorating idea for using it that doesn’t involve live fish.

A Visit to a Chinese Doctor : My experiences with Chinese traditional medicine.
Chinese Cyberpunk Transilluminated Breasts Rock! : An amazing bit of Chinese engineering.
Ringing In The Year Of The Goat : Welcoming in the Chinese year of the Goat.