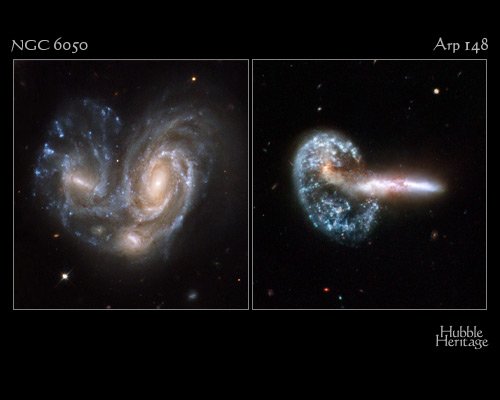 And You’ve Got Problems?

Bigger than a rush-hour fender-bender.  Bigger than a California Winter Fog-bound multi-car/truck/motorcycle traffic pileup.  Bigger even than when worlds collide.

This month, the Hubble Heritage Project gives us galaxies colliding.

I really love the Hubble Heritage Project.  The images they are compiling and making freely available to the world are just breathtaking.  In this dual photo, the image on the right is described as:

The aftermath of an encounter between two galaxies is shown, resulting in a ring-shaped galaxy and a long-tailed companion. The collision between the two parent galaxies produced a shockwave effect that first drew matter into the center and then caused it to propagate outwards in a ring. The elongated companion perpendicular to the ring suggests this is a unique snapshot of an ongoing collision.

So there you have it.  With all the vastness of outer space, two galaxies still manage to run into each other.  Keep this image in mind next time that cellphone-talking, putting-on-makeup-while-drinking-coffee-and-reading-a-newspaper idiot of a driver dings you in morning rush hour traffic.

It could be a whole lot worse.

The Corner Office : The view I’d like to have from my office window, if I had a window in an actual office.
Something Good Happened this Week : Sometime, even in the midst of ongoing bad news, something cool happens. This was one of those cool things.
This and That : Catching up on current family news.