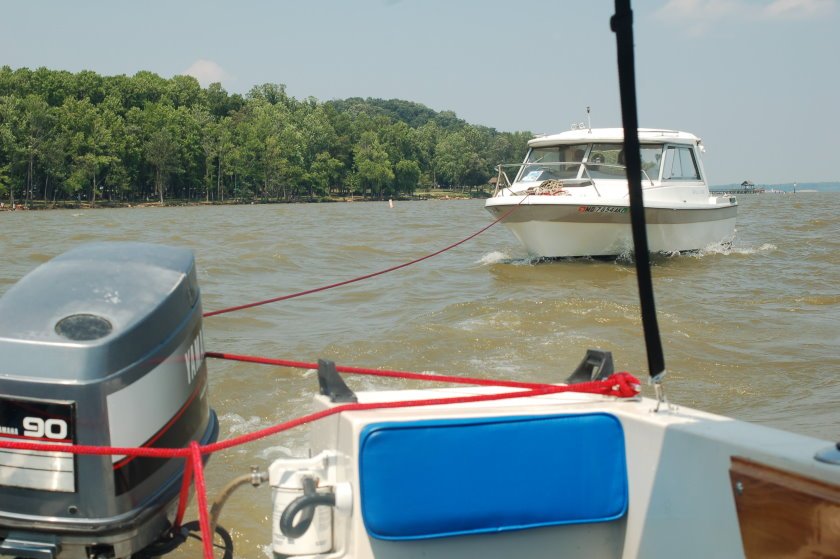 Rescue on the Potomac

This weekend was a two boating-day weekend. Saturday I spent the afternoon bouncing around the Potomac between Occoquan and Quantico, and at anchor in a quiet cove over on the Maryland side. It was a nice afternoon (any time on the water is nice, actually) even though the water was a bit rough. Sunday I went out again with friends as a two-boat rally, which turned out to be a bit of adventure.

Our friends just purchased their boat two weeks ago; a classic Bayliner Hardtop model, 20+ feet stern drive. A nice solid boat, but of course as a used boat it needed work. (Actually, even a new boat needs work.) After two weeks getting what appeared to be the major issues resolved, our friends were ready to put the boat into the water for their maiden run.

Being the careful mariner he is, he called me Friday evening. He suggested I meet him and his wife Sunday (yesterday) at the marina with my boat to escort them during their first trip. The stated purpose was “in case we break down, you can tow us in.” In reality, I figured it was just a cheap excuse to get me back out for a day’s boating.

However, I was sympathetic about concerns for their newly purchased boat’s mechanical reliability. I remember too well my first outing after purchasing “Sea Dreams.”

Back before I purchased my boat, I did take a trip out on the Mississippi sound with the seller before making an offer. The boat ran well, after a bit of a glitch when the engine died just outside the Long Beach, Mississippi, breakwater. After fiddling with it, the seller got it running again and the rest of our trip was smooth. I later made the deal, paid the money, and brought my new toy home.

I spent the next week cleaning and polishing my boat and inviting friends to go with me on my maiden cruise. Only one person, a lady friend, took me up on my offer. On a bright late October Saturday morning, one week after buying my newly named “Sea Dreams,” we launched in the Pascagoula river. We cruised around a bit, pulled into a local riverside restaurant for lunch, and then cruised on back to our launch point.

On the way back, in a very secluded section of the river, my boat’s engine did quit.

My lady friend gave me “The Look,” and I assured her I wasn’t playing games which just made her less happy. After twiddling with the engine, I came to the conclusion that it was in fact not going to start.

Neither of us had a cell phone and the VHF radio my boat came equipped with didn’t work. I didn’t even have so much as a boater’s pole to push us back to an inhabited part of the river front. My friend and I discussed the fact that no one would really miss us until Monday morning when we didn’t show up for work, and that we didn’t have any food or water with us.

About one hour after we broke down a boat with two fishermen appeared around the bend, saw we were in trouble, and kindly towed us back in using a towline they had. They were real decent; once back in at a marina different than where I launched they got me to where my truck and trailer was parked, followed me back to my boat, helped pull it out of the water, and refused any offer of money as compensation.

The problem turned out to be a rather simple issue of the fuel/water separator being completely full of water, a maintenance issue that could have been fixed on the water had I known. It was a valuable experience for me as a very novice boat owner; an experience I have not forgotten. (Neither did the lady friend who accompanied me that day. She never came back out on the boat with me.) Over the past several years I’ve made sure to properly maintain my boat and acquire the proper boating equipment.

So yesterday afternoon my friends and I met up at the local Potomac River marina with our boats. The water was even rougher than the day before but still safe enough for our relatively small boats.

We launched and tied up at the piers. It took a bit of effort to get my friend’s boat started. Once started, he ran it a bit so the engine could warm up, and when it sounded smooth he took off. I fired up “Sea Dreams” and followed them out through the breakwater then several hundred yards into the river. All went well for 20 minutes.

Then I noticed my friends had stopped their engine. My VHF radio worked, but their VHF didn’t. I pulled close and by yelling across, learned that their engine was overheating, badly. My friend flipped up the engine cover and I could see steam billowing out. Not good.

He thought he could let the engine cool down a bit and get the boat back in. After waiting awhile he fired up the engine but when it quickly overheated again decided he’d need me to tow them back in.

By now, the river had really gotten rough, and he had floated a lot closer to the marina breakwater than either of us liked. I was floating a little ways past the marina close to the riverside beach. The water was so rough there were small waves breaking on the beach, and I was almost in the surf line in about five feet of water.

I pulled out my 75 foot-long 3/8″ line I had purchased for use as a tow line several years earlier, but never before used. I pulled up close to my friend’s boat, tied one end of the line off to a cleat on my boat, tossed the rest of the line over, and completely missed the other boat. I pulled the line back in, tried again, and this time my friend managed to grab the wet line, tangled and full of knots.

While he untangled the line and tied his end off I tied off my end to my rear cleats. The Bayliner was three feet longer than “Sea Dreams” and over 1200 pounds heavier. My rear cleats were bolted through the hull with fender washers so I knew they would be solid enough, if I took things slow and put the strain evenly on both cleats.

I tied off to both cleats and attempted to tie the tow line into a “Y” rig with the center point just beyond my outboard. After three unsuccessful tries at making a knot our boats were dangerously close to non-water things like rocks and beach. I gave up knot-making, powered up my boat and pulled us away from the beach and breakwater with most of the towing strain on one cleat. Once further out into the river, I put slack back in the tow line and finally managed to get a center knot tied so the strain was balanced on both cleats.

However, now the tow line had slacked so much it wrapped around my outboard engine and prop. I had to stop my engine, lift it all the way up, climb out on my swim platform and clear the line. Then I fired up the engine still fully out of the water, lowered it back down while simultaneously working to keep slack out of the line so it wouldn’t foul again. By now we had drawn the attention of other boaters. I’m sure folks on other boats watching me enjoyed the show.

With my tow rig finally made up we moved slowly back into the marina. I kept my engine RPM at about 10K, just enough to move and control against the current and wind. Once through the breakwater I had to figure out how to get the other boat to a pier. I decided to make for the fueling pier, which seemed a good plan with the layout of the marina and the way the currents and wind were pushing us, but before I could get close another boat jumped in to refuel. My friends then decided to just fire up their engine long enough to get themselves to one of the launching piers.

Once they were able to get a line to the pier they untied my tow line and I actually managed to get the line back onboard without again fouling my engine. I tied off across the launching pier from my friends and helped them get their boat back on their trailer.

I was ready to go back out and give my friends a short river tour, but for some reason they didn’t feel up to it. We had lunch standing in the shade of their boat, in the parking lot, talking to some other boaters. We finished lunch and made our separate ways home.

So, I guess I’ve come full circle in my boating skills. I’ve gone from needing to be towed in, to being able to tow someone else in. My tow wasn’t a particularly graceful evolution as such things go. But considering the water conditions and relative weights of our boats, this tow really was dangerous. I managed to get us back in without anyone getting hurt and nothing getting broken so it counts as a success.

I just as soon not have to tow someone else again. Hanging out in a quiet cove along the river is my real idea of boating fun.

The Year of Hurricane Katrina : My story of surviving hurricane Katrina and the very long year after of recovery.
A Shout-out To The TSA : As much as I love to hate on the TSA, when they do something good they deserve recognition. This was such a time.
Boatless! : On selling my beloved boat Sea Dreams.