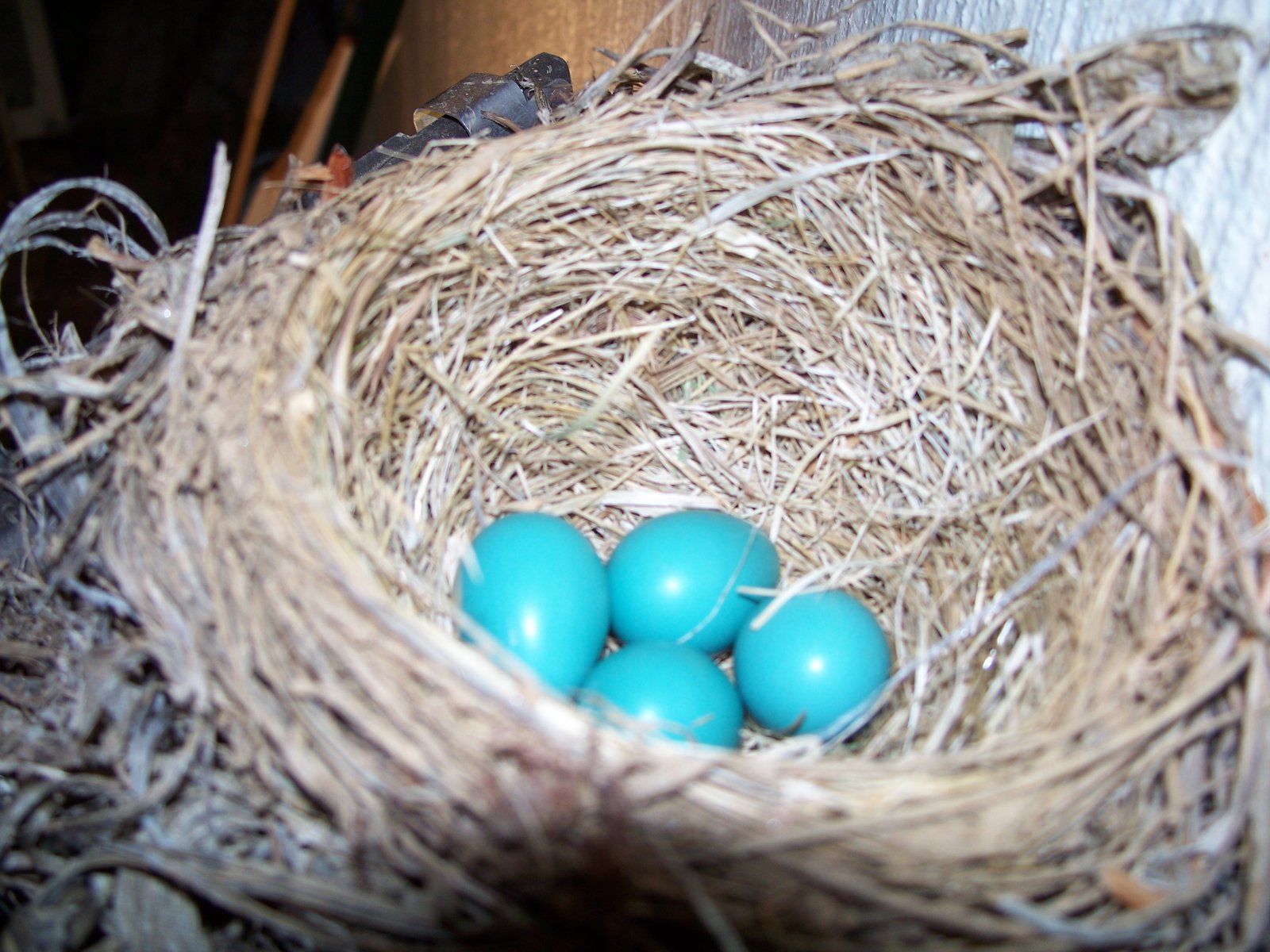 We had an interesting nature call this past spring.  It seems a pair of birds decided to build a nest, lay their eggs, and raise their young right over the outside light next to our basement patio door.

I’m not a birder, so I honestly cannot call these birds by their ornithologist’s name.  I can say they were small, mostly brown with a red breast. The four eggs were a shade of teal (blue green).  I can also say that Winnie and I had a lot of fun in the short period of time it took for these birds to incubate, hatch, grow up and leave home.

It was Winnie who first discovered the birds, near the end of this past April.  We have a walk-out basement with sliding glass doors that leads to a small patio. Facing the doors from the outside, there is a dual floodlight on the left side, tucked just under the overhang of the first floor of our house.  It was in this sheltered little niche that the birds had built their nest.   I came home from work one day and Winnie announced that there was a bird’s nest with eggs there.

We went outside, and Winnie showed me the nest. I couldn’t believe it at first that birds would build their nest so close to a place where people hang out. But sure enough, I could see the messy construction of a nest with a bird hanging out, looking around like the watchful proud parent it was to become.

A short while later the bird flew off leaving the nest unguarded. I took the opportunity to take a photo of the eggs inside. I’d never seen bird’s eggs in this color before. I was careful not to touch the nest or the eggs, and careful to warn Winnie not to touch them, least the parents not return.

Winnie discussed how tasty the eggs might be, but happily decided not to try and cook them…

The bird parents did come back.  Over the next couple of weeks we would watch one of the birds siting on the nest, seemingly watchful and alert, but never too concerned if we were sitting at the picnic table just underneath the nest.  At dusk they would fly off and leave the nest exposed for a while, and we’d be able to peek in a see what was going on.

Sure enough, one fine day in May, Winnie reported that she heard “peeping noises” from inside the nest.  During this time, the parents were never gone from the nest for more than a few moments.  One time, the parents were gone long enough for me to get another picture of the inside of the nest.  By this time, the chicks had already grown feathers and were almost as large as the parents.  I was amazed at how closely packed they were inside that nest.  I was also impressed at how much time the parents spent flying back and forth, apparently bringing home food for the family.

They were there another week or so after I got their photo, then by early June we heard nothing.  Peeping inside the nest, we saw it was empty.  The birds had truly flown the coop.

I can’t say this has a completely happy ending.  A couple of weeks after we became empty-nesters, we were doing some gardening in the area just off the left side of our patio.  We discovered the mostly desiccated body of a small brown bird. It looked like one of the birds from the nest, and we speculated it had “crashed and burned” learning how to fly.  At least, it didn’t look like a cat had gotten it.

We’ve left the nest alone, in the thought that birds might want to use it again next year.  This was a small event in the great cycle of nature, but Winnie and I thought it was pretty neat.  If a pair of birds come back next year to this nest that will be just fine with us.

Prince William County Volunteer Fire and Rescue Breaking Bad : My commentary on an unpleasant encounter with a member of our local volunteer fire and rescue team.
Lets Talk Turkey : Describing a normal Thanksgiving Day in the Charest hosehold
This and That, Christmas 2017 Edition : Catching up on all the family news at Christmastime.