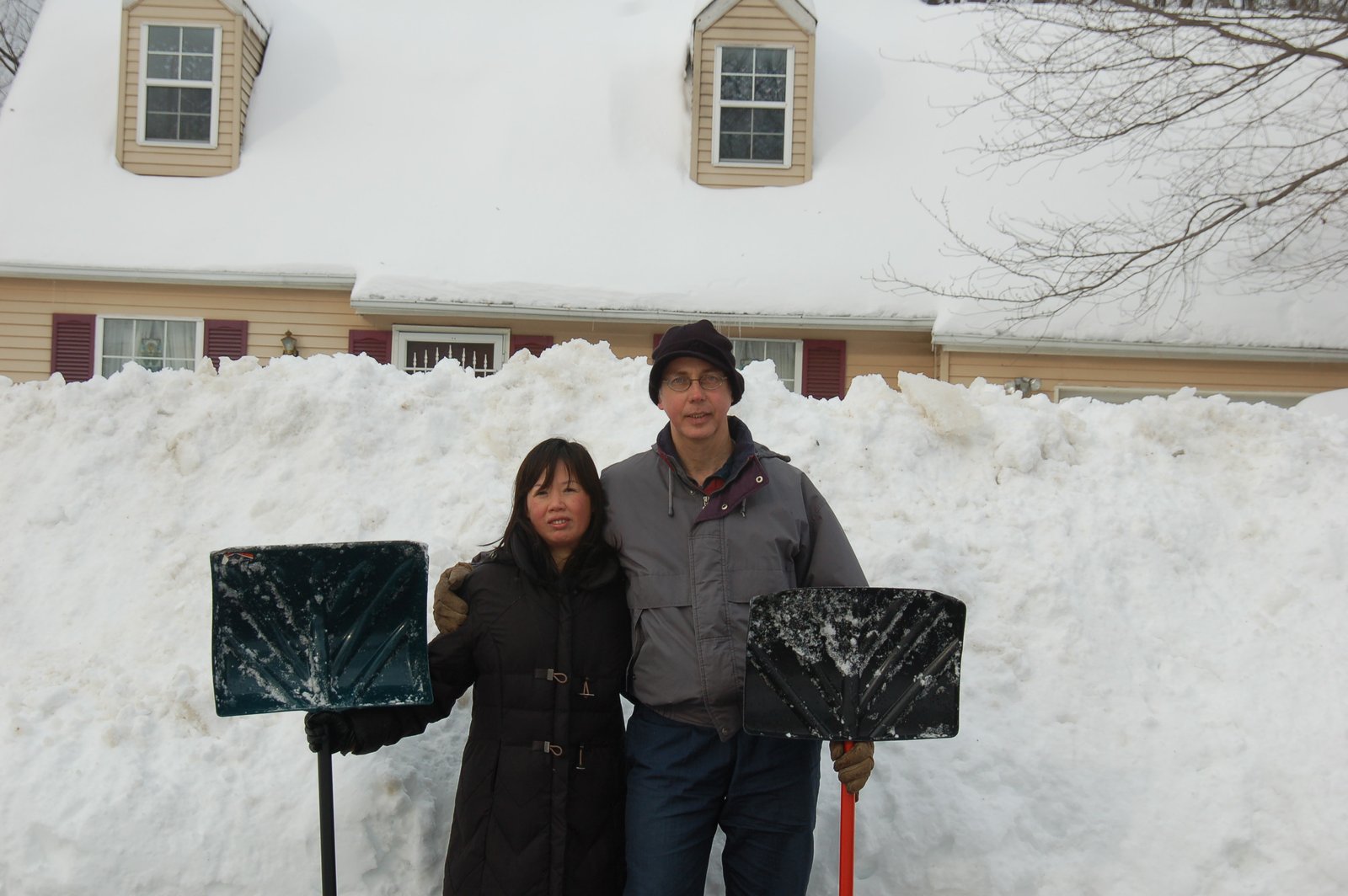 A Weekend of Snow

Our local newspaper is calling it “Snowzilla.”  Other news media are calling it “Snowmaggedon” and “Snopocalypse.”  Yet other helpful news sources are calling it “number 4 in recorded history for D.C.”.  Whatever our media chooses to call it; I call it 30 hours of watching the snow fall, interspersed by periods of going outdoors and shoveling the winter wonderland off the sidewalks, driveways, and cars.  When all was said and done, this past weekend we had 21 inches of snow pile up on top of the six inches left from the week before.  With the weather services predicting more to come over the next several days.

Is summer here yet?

We had our winter warnings as early as the last week of January.  The weather services started predicting “one to two” inches of snow for Friday, February 5.  Not to be cynical, but I was suspicious from the start, remembering that the same weather services predicted “one to two” back in early December.  They were correct that we had “one to two” inches then.  But after two it kept right on snowing until we had 18 inches of frosty white stuff to dig out from.

So I watched the weather closely all week, as did pretty much everyone else I knew.  By Monday, February 1, the weather services were reporting we might be getting up to 12 inches. By Wednesday, the weather reports had escalated to predictions of “24 to 30” inches starting mid-morning Friday.  By Thursday, February 4, everyone I knew was preparing for a major snowstorm.  I had a brief discussion with my team lead, and we agreed that Friday would be a good day to work from home.

So, Friday, I watched the winter weather from my home office.  The snow started falling about 9:30 AM, but it was 41 degrees outside so nothing was accumulating.  It wasn’t a heavy snowfall, but it was steady.  By 3:00 PM, the temperature was still in the high 30s and I began to think we may have dodged a bullet.  No joy.  By about 5:00PM, the temperature dropped to the low 30s and snow started falling heavier and piling up.

By 9:00PM the snow cover had risen to the bottom of our front door, so Winnie and I got out and spent about an hour digging out the walkway, driveway, and pushing snow off the tops of our cars and my boat.  We finished, went to sleep, and woke up about 7:00 the next morning, Saturday.  It was still snowing and still accumulating.  Winnie, being the early morning person she it, bundled up and went right outside to shovel out a path, again.  I did my husbandry part by refusing to work until after my morning cup of tea, which just coincidentally I finished as Winnie finished shoveling.

Winnie was supposed to go to work Saturday morning, but we’d already learned that the mall where she works was closed along with just about everything else in the area not related to emergency services and clearing snow.  We hibernated indoors most of the day.  The TV was not working, an apparent result of our rooftop satellite antenna being buried by snow – something those ads touting the superior performance of satellite over cable neglect to mention.  So we ended up watching DVDs, playing on the Internet (DSL worked fine thank you), napping, and generally having a quiet day.

During the afternoon, news reports started coming in of major power outages in our area due to trees falling on power lines.  With the temperatures in the high 20s by this point, the loss of power was a serious problem so local shelters began opening up.  The local news also reported that we were experiencing a “winter hurricane,” with two storm fronts combining to dump snow.  My only observation was that this Virginia-style winter hurricane wasn’t nearly as exciting as the Mississippi-variety summer hurricanes I had the pleasure of experiencing several times.  Whatever.

The snow finally stopped falling in our area at about 5:30PM; 30 hours of continuous snowfall.  Winnie and I had some supper, then bundled up again and trudged outside to shovel.  We spent the next three hours digging out the walkway, driveway, clearing the tops of our cars and trying to dig out a clear path to the road.

I park my Rodeo on the street next to the curb, while Winnie’s new Nissan Versa gets the prime driveway parking slot.  The snowplow had come through our street early that morning, so we at least generally knew where the snowplow ridge would be.  We decided to dig just enough around the Rodeo so whenever the snowplow came through again, all we needed to do was dig through the ridge and get both cars free.

Sure enough, by the time we woke up the next morning, Sunday, the snow plow had already been through our quiet Cul-de-sac again.  We were going to take our time and have a leisurely breakfast before digging more snow, but Winnie’s boss called and asked her to come into work.  So, once again, Winnie and I bundled up and trudged outside.  We spent about an hour digging through the snow ridge to get our cars freed, and waving to our many neighbors all outside doing the same thing for their cars.

I measured the snowfall accumulation at 21 inches.  The local newspaper later reported only 17 inches for our area, so I don’t know where or how they measured.

We dug enough to get our cars freed, and then Winnie got ready to go to work.  We needed groceries, so I got dressed and left together with Winnie taking both of our cars, just in case.  By this time, 11:30AM Sunday morning, all our local neighborhood roads had already been plowed once with about 2 inches of hard-packed snow still on top of the roadway.  As we drove out to the main road, we passed various people digging their cars out and throwing the snow out into the roadways, adding to the mess.  It wasn’t until we reached the main highways that we saw any clear roadway, and even here there was a lot of snow pack on top of the roads that made driving bumpy and sloppy.

Snow was already beginning to melt so we also had to contend with large pools of slush and ice mixed with salt.  A lovely mix indeed.  Just before reaching the mall, I turned down a side street that was our alternative way into the mall parking lot.  It was plowed by the highway where I turned, next to a small motel, but just past the motel the plowed road ended and I became an off-road vehicle following in the tire tracks of those who went before me.  I almost got stuck in the snow at one point but managed to free myself and made it through to a plowed road leading to the mall parking lot.  Winnie, following behind in her smaller Versa, wasn’t impressed with the side trip but made it through.  Then she bitched me out for leading her down that road.  Overall an exciting winter drive.

I did my shopping and made it back home, where once again I dug more snow to finish clearing a curbside parking area for our cars.  Later that evening I learned that the federal government would be closed on Monday, meaning I had the opportunity to work from home again.

So, here we are.  The entire region is blanketed by a thick layer of snow which prevents me from commuting to work, and Washington is paralyzed.  The bad news is that we’re under a winter advisory for another snowstorm with sleet starting tomorrow, Tuesday, with yet another possible snow storm coming this weekend. In still other news, on February 2 that ultimate winter weather forecaster, Groundhog Punxsutawney Phil, predicted another six weeks of winter.

This and That, Deep Freeze Edition : Staying indoors on a really cold winter’s day.
Watching The Snow : Watching snow fall outside my window is rather pleasant.
This and That, Snow Day Edition : There’s few things better than working from home on a cold wintery day.