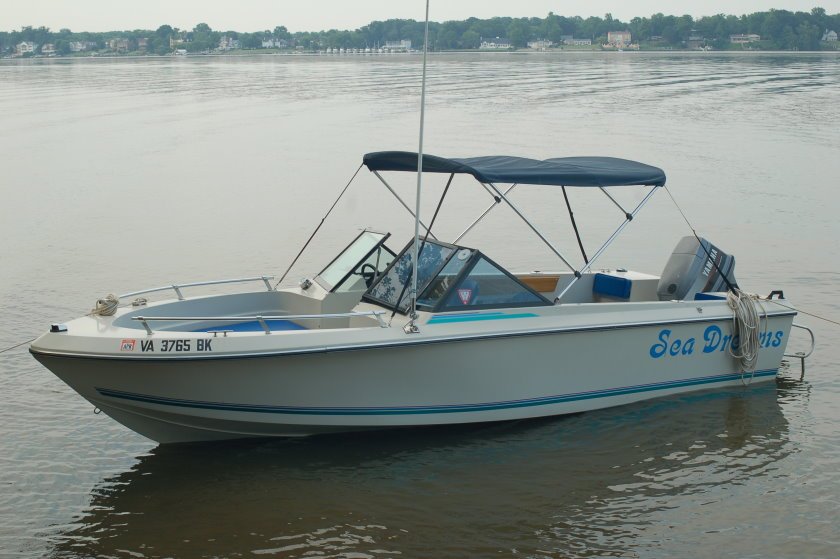 Last Friday I did something that a couple of years ago would have been unthinkable.  Yesterday I sold my beloved little boat “Sea Dreams,” the boat I purchased in Long Beach, Mississippi on October 26, 2002.  This would be the boat that I lovingly maintained, repaired, hauled up to northern Virginia, restored, and occasionally even took out onto the water for a brief day’s cruising and fishing over these past 7-1/2 years.

I’ve heard that the two happiest days in a boat owner’s life is the day they buy a boat, and the day they sell it.  I’m still not so sure about the ‘selling it” part.

I ended up completely rebuilding the interior of “Sea Drams” in the spring of 2008.  I had fun with the restoration project, even though I don’t really want to do a project like that again.

Last summer, due to our home reconstruction project, I only ran the boat three times, the last time being just a couple of hours during a Labor Day picnic at Leesylvania State Park.  This past winter, Winnie and I once again discussed selling the boat and buying a newer, larger boat.  This time, our finances were in better shape and my job felt more secure.  Over the past two years, I had been looking and thinking about what I wanted, and decided that my next boat should be a trailerable weekend cruiser-style sailboat.  One large enough for a comfortable cabin that Winnie would enjoy hanging out in with me on boating trips.

Then, about one month ago, a double whammy of taking Winnie to a boat show, then taking the boat out for an early spring cruise made our decision.

Winnie came with me to the annual Chantilly Boat show in early March, and to my surprise really took to the lovely new power boats on display.  If anything, she was more enthusiastic then me.  I had the chance to show her just how nice the larger boats were fitted out with creature comforts such as enclosed toilet, seating table, and sleeping areas.  By the time we left the show, she was convinced I needed to buy a new boat by next year.

Then a week later, we decided to take “Sea Dreams” out for an early season run.  I normally take the boat to a mechanic to have the engine tuned and checked out at the start of each season.  However, this time, since the engine had been given a clean bill of health the year prior, and I only ran it three times, I decided there was no harm in just cleaning up the boat and running the engine a bit.  Which I did.

On the big day, a Sunday, we got out about 10:00 and launched in Leesylvania State park, my normal launch point.  I ran out on the river, and discovered it was completely clogged with packs of driftwood, so I ended up staying close to the shoreline and anchoring just off Woodbridge.  We hung out for several hours talking, eating lunch and listening to CDs. It was a lovely day with hardly another boat in sight.  By about 3:00 we decided it was time to head for home.  I fired up the engine, pulled up the anchor, and the engine died.

I messed with the engine for a bit, but the more I ran it the quicker it died.  Then it refused to start at all.  Not good.

Winnie, as she normally does in crises, took it all in stride.  I tied off my emergency distress flag on my VHF antenna, spotted one other boater much closer into shore, and started to sound my horn.  After a couple of minutes the other boater sounded his horn in return and motored over to us.  We were saved.

The other boater was real decent.  Due to his time constraints, he couldn’t tow us back to the park where we launched from but was willing to tow us into the marina he left from, a place called “Tyme and Tides.”  It was a port, and I wasn’t going to turn down a tow.  So, once again, “Sea Dreams” was towed in, the third time since I’d owned her.

The marina turned out to be about six miles north of the park we launched from.  Once we were in and “Sea Dreams” tied up, we called a cab to bring us back to the park.  We retrieved the Rodeo and trailer (I had actually remembered to bring my car keys with me from the marina, which greatly impressed Winnie since she never thought about it) and drove back to the marina with trailer.  Once back, the marina staff helped us drag “Sea Dreams” around to their ramp and back on the trailer.

So we had an adventure that day, just not the kind I really wanted.  That evening, Winnie and I decided it was time to sell the boat “As Is,” and focus on purchasing a newer one rather than put any more money into repairing “Sea Dreams.”  I placed the ad in Craig’s List later that week.

Over the next couple of weeks I received several calls and a couple of people looking at the boat, but they weren’t really interested.  Then an older man, Jerry, came by last Friday afternoon.  I could tell right away that he was interested.  He explained he’d never owned a boat before, but was completing boating safety classes through the Coast Guard Auxiliary and was ready.  I explained the boat’s condition, showed him the work I had put into her two years prior (and over the years I’d owned her) and what I expected was wrong with the engine (clogged carburetor).  We finally started talking money, and after a bit of haggling we settled on a deal that Winnie approved of.

We spent the next hour doing the paperwork and getting “Sea Dreams” ready.  Finally, all was set and Jerry climbed into his van and drove off, towing “Sea Dreams” to her new home.  She was off to her next adventure.

I think I sold the boat to the right owner, which is the important thing.  But for now I’m boatless.  This summer I plan on taking sailing lessons, then renting a sailboat on weekends to practice and get use to boating under sail.  Next winter, I’ll be buying a new boat.

Editor’s Note: I hope to be writing a full-length feature story about “Sea Dreams” soon.