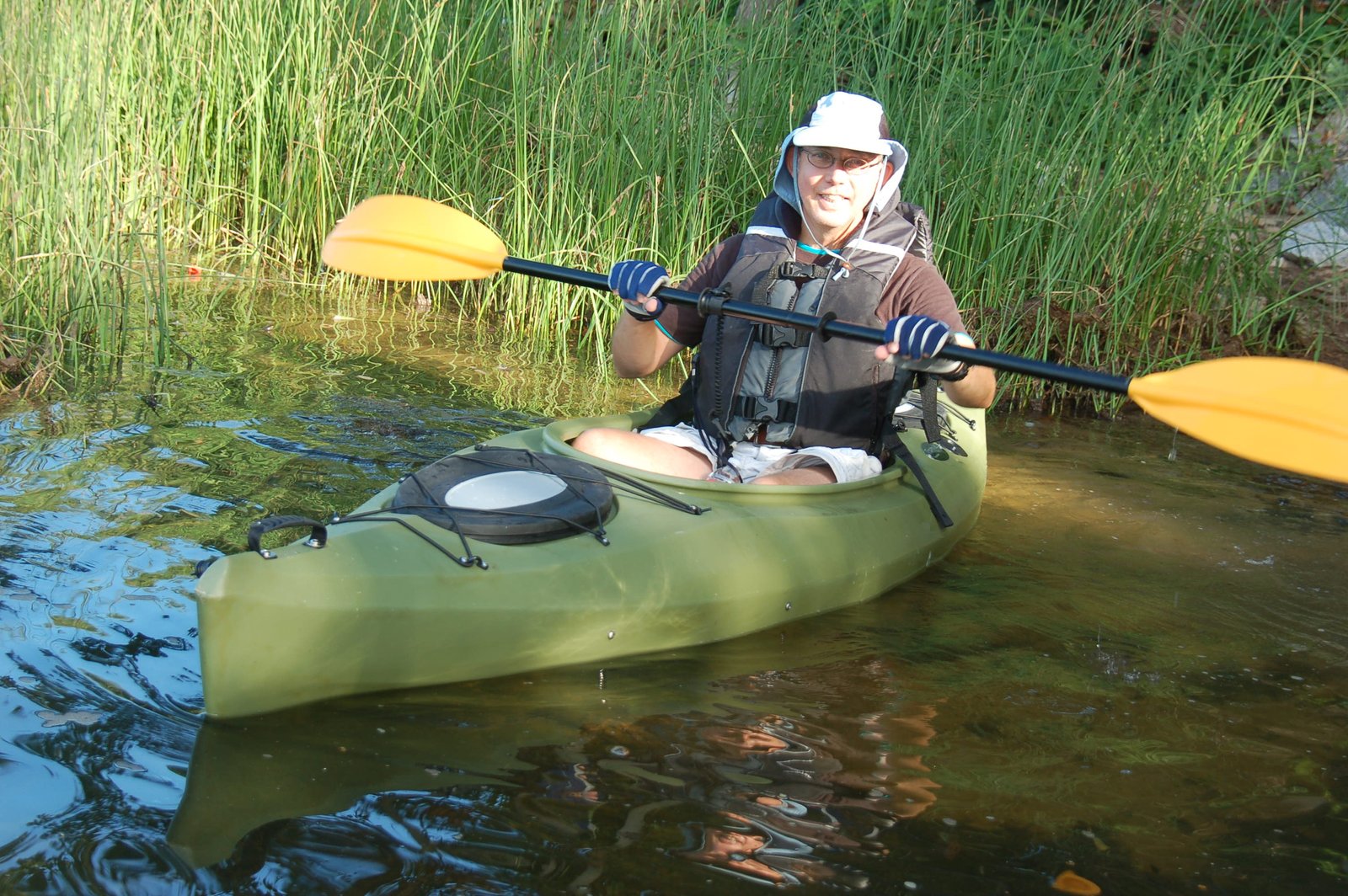 A Different Kind of Boating

Actually, Winnie bought the kayak for me as an early birthday present.  Her reasoning was that since my birthday came in the middle of the summer, I’d have more chance to use a kayak if I got it now.  Sometimes, I like how she thinks…

I’ve been looking into kayaks as a boating activity for a while now.  They really intrigue me for their simplicity and functionality.  In many ways, I look at kayaks as a water-born bicycle, able to extend my range of exploration while providing lots of outdoor exercise.

So, Friday night we stopped by our local “Dick’s Sporting Goods,” a big box sports store relatively new in this area.  Just our luck, they were having a sale on kayaks that week, all the more reason to buy now.  We looked over the selection of single and double kayaks, and after a while we actually got a salesperson to help out – who actually seemed to know something about kayaks.  We looked at the tandem kayak, but the salesperson explained that a tandem would be hard to handle with just one person.  Since I expect to be going out alone most of the time, we moved on to single-seats.

While I’m not much of a fisherman, I do like to at least pretend that I might catch a fish now and again, so I opted for a sports model, a Future Beach “Trophy 126DLX” kayak.  It’s rated as a “sporting sit-in,” 10.5 feet long, 2.45 feet wide, weighs 47 pounds empty, and can carry up to 250 pounds.  This is plenty of capacity for me, even with the extra weight I’ve started to put on these past few years.  This boat also claims a “Dihedral” hull, which means the bottom is concave instead of the usual convex (smooth rounded) bottoms of most kayaks.  The pitch is that this increases the stability of the boat, also a good thing as I really don’t care to get dunked.  Even with a life jacket on.

So, we bought it, along with a paddle.  Winnie, being the meticulous person she is, held the receipt until we got out to the car and I proved to her I was able to get it up on the rooftop car rack by myself.  I used a blanket I always carry in the Rodeo to protect the area of rooftop just in front of the rear window, put one end of the kayak on the roof, picked up the other end and slide it up.  Then strapped it down using some light-duty straps I also purchased with the kayak.  Winnie was impressed, and agreed that I could in fact keep my new toy.

I took it out on the Occoquan River the next day for sea trials.  I found the kayak was amazingly easy to paddle, and not nearly as much stress on my shoulders as I expected.  I also discovered just how cool it was to be able to get right up on a shoreline in six inches of water, (mostly) silently paddling, getting close to birds and even an occasional turtle sunning itself.

I spent almost three hours that Saturday alternating between paddling around, resting, and pretending to fish.  I obviously didn’t pretend too well, because no fish were impressed enough to bite.  No problems, it was still a great day.

I’ve been out twice more this past week testing out what I can do in the kayak and getting exercise and fresh air in the process, all while being out on the water.  All-in-all, not too bad.  I don’t think a kayak will replace my desire for my own mid-size trailer-able sailboat, or another small outboard runabout (or both), but a sailboat is next year’s project (at least).  For now, I’m getting back out on the water again in my own boat, getting some exercise and exploring water areas I could never get into with a larger motor- or sailboat.  Overall, a great birthday present.

Perhaps one of these days, I’ll even catch a fish.

So Long…To All The Fish* : A very fishy story.
Happy Mothers Day! And a Few Words on the Past Month… : Catching up on the news.
Boatless! : Selling my first powerboat Sea Dreams.