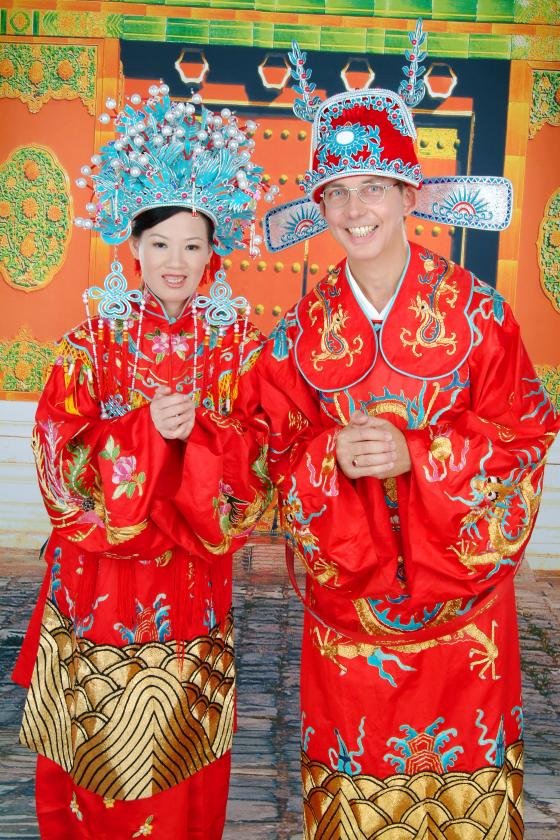 A Story of Long Distance Romance and a Chinese Wedding

For the new year of 2007, I felt it was time to write about our (Winnie’s and Mine) courtship and marriage. As we have now been married more than three years, I think it’s story worth telling.

My divorce from a 15-year marriage became official November 15, 2001, after months of pure hell. Once divorce became inevitable but before it became final, I knew I did not want to spend the rest of my life alone. I felt I owed it to myself to try the “marriage thing” one more time.

The means of meeting eligible women in the part of Mississippi where I was living at the time seemed pretty slim. I spent a few months settling down from the divorce and really thought hard about the type of people I enjoyed being with, and what traits I found desirable for a potential wife. As I was already “living” on the Internet, I started exploring on-line dating sites just to see what they were all about.

What I found most useful in the on line dating sites was the compatibility questionnaires. By the time I had worked though several, I started to understand the type of woman I would most like to meet. And I also realized, this woman was probably not already in the United States. I realized I really wanted to meet a woman living abroad, with my first choice being Chinese.

I still cannot explain why. I can say that I’d had several pen-pal friends from China spanning several years and began to feel I understood Chinese people. I could say I had realized Chinese woman (Asian women in general) were the most beautiful both physically and spiritually anywhere in the world. I could say that an Internet courtship felt the least threatening, the means I felt most comfortable with in meeting new people. But none of these reasons really got down to the heart of why I choose this option.

I just felt, after many months of reflection, that this was something I had to try.

I started listing myself on various international dating websites. I explored several, and ended up with paid accounts on two, Asia Friend Finders, and Cherry Blossoms. I had already been on Asia Friend Finders (AFF) for several years listed as looking for Pen Pals and met several wonderful long-distant friends. I knew about Cherry Blossoms as a long-standing operation for international marriages, which had also been one of the first to migrate from mail-correspondence to the Internet.

I started writing e-mails. I also started receiving e-mails from women through these websites, many from the Philippines but also China, Taiwan, Indonesia, and Russia. I always made a point of answering each and every e-mail sent to me. At the same time, I was sending out several e-mails each week, focused on women in Taiwan and China. Most women never responded; Of those who did, most only replied once. A very few corresponded for a short period of time, but then one of us would stop.

Seven months later I was beginning to feel frustrated with the Internet romance process. At this point I’d been hit on twice for “business arrangements,” a couple of women had attempted money scams, a few had asked me for money, and I had corresponded with one women who expected me to marry her after our first e-mail. All this was from receiving a response to one out of approximately every four e-mails I sent out. I was receiving about one new e-mail a week from women I had not previously written to, but even when the woman wrote me first she rarely even responded to my reply.