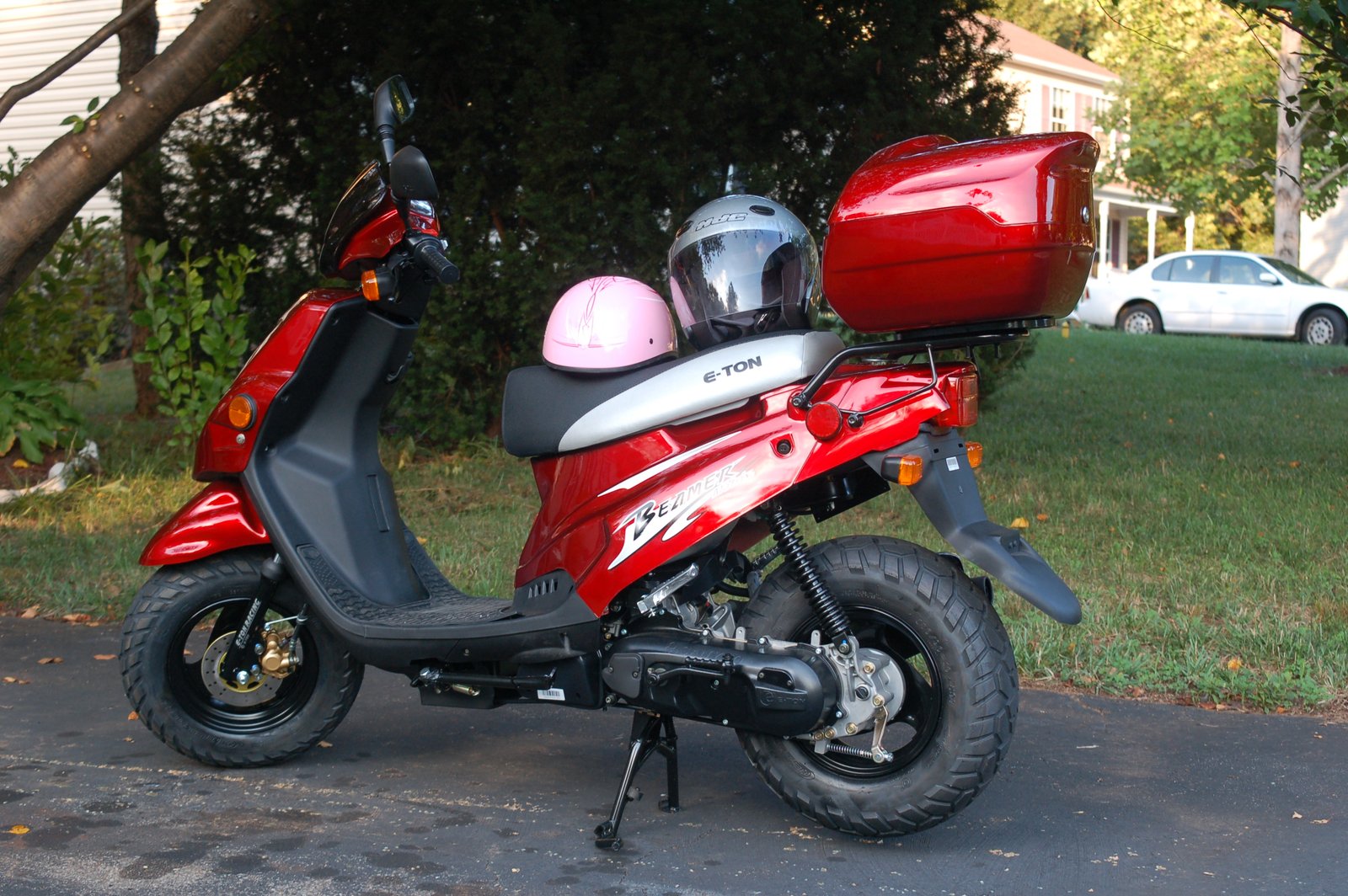 So yesterday was another Halloween, the eve of All Saints Day. For the most part, it was a quiet Halloween with only a few families worth of children coming around Trick-or-Treating.  But, just before 10 o’clock we had our own trick-or-treat surprise.

Just before 10:00 PM, a police officer came to our door letting us know our much beloved moped, stolen in early September, had been recovered.

We had bought a brand new Eton moped this past August, intending to use it for a second vehicle, getting me back and forth between the bus commuter lots.  On Sept 19, it was stolen from the commuter lot.  I dutifully filed a police report, and when we received a letter from the police department several weeks later explaining the case was considered “closed” with no leads, we pretty much wrote the moped off.

I only still had the paperwork as I thought I might need it for an income tax claim.  The keys I threw away a few weeks after the moped was gone.

Last night about 9:45 PM, the doorbell rang.  Winnie and I were downstairs watching a scary Halloween movie on TV, just about ready for bed.  My first though, hearing the doorbell, was that it was a bit late for Trick-or-Treaters.

I opened the door to see a police officer on the doorstep.  (Okay) I thought, (this is interesting).  The officer politely asked “Are you Mr. Charest?”

“Do you own a red Eton Moped?”

(brief moment of intrigue)  “I used to.”

“Yes, it was stolen in early September.”

“It was stolen?  Did you file a police report?”

(Now really interested) “Yes I did.”  (flash of excitement). “Was it recovered?”

“Yes it was, over in Woodbridge.  But I’m not seeing the police report.  We located you by running the VIN number.”

At this point I invited the officer in, and pulled out all my paperwork including the copy of the police investigation letter.  The officer explained that another officer over in Woodbridge, still there guarding the moped, had caught some kids riding it while egging houses.  He chased them and they ran off leaving the moped.  When he traced the VIN, my name came up, but no police report.

After a few minutes of discussion, and explaining to Winnie what was going on, the officer and I discussed what to do with the moped.  The officer who found it was still there guarding it as recovered stolen property.  They could not take it with them, and really didn’t want to have it towed.  The obvious solution was to hitch up our trailer, drive over there, and bring it home.

The officer agreed to lead us to the location, and had no problem waiting for us to get ready.  While we got dressed and hitched up the trailer, he followed up on the theft report.  Turns out, the officer who originally filed it mis-keyed the VIN number.  But the report was found, and the officer updated it while he waited.

Once we were all set, the officer led us over to Woodbridge where the moped was found.  It was a rather interesting experience following a “friendly” police car.  While we drove, I deliberately tried to damp down our expectations.  I really thought that, at best, the moped would be pretty wrecked by now, and told this to Winnie.

We arrived at the recovery location with the other police officer standing guard.  The moped was parked behind a large dumpster at the end of a residential road dead-ending on an open field.  And our moped was in excellent condition.

It had some damage.  The ignition switch had been drilled out (freeing up the steering bar locking mechanism), the gas cap key lock had also been drilled out, the lock on the storage box had been removed, and there were some scratches on the body along with broken eggs.

But overall, it was still in great shape.  Whoever had it only put about 300 miles on it.   The officer found a helmet with the bike that looked like the one I had in the seat storage compartment, but the seat storage compartment lock did not appear to have been tapped.  The officer explained he had already dusted the helmet for fingerprints, and would be keeping it for prints and hair samples in an attempt to locate the owner.

We talked a few minutes, and I explained the circumstances of how it was stolen.  I think Winnie and I were both acting like kids at Christmas – the police officer who first came to our house actually seemed to be enjoying himself.  After the officers had all the info they needed, they helped Winnie and I load the moped on our trailer.   Winnie and I thanked them both for their help, and we drove off.

We needed to back out of the dead end street with the trailer onto a major cross road, so the officers stopped traffic for us while we backed up.  We returned home about 11:30, unloaded the moped into the garage, and did a little more inspection.  Overall, nothing major that should prevent us from getting the moped fixed and back on the street.  The oil reservoir was actually still half full of oil.

We closed up the garage, and before we turned in for bed we did a little dance in the Kitchen.

So Happy Halloween to all!