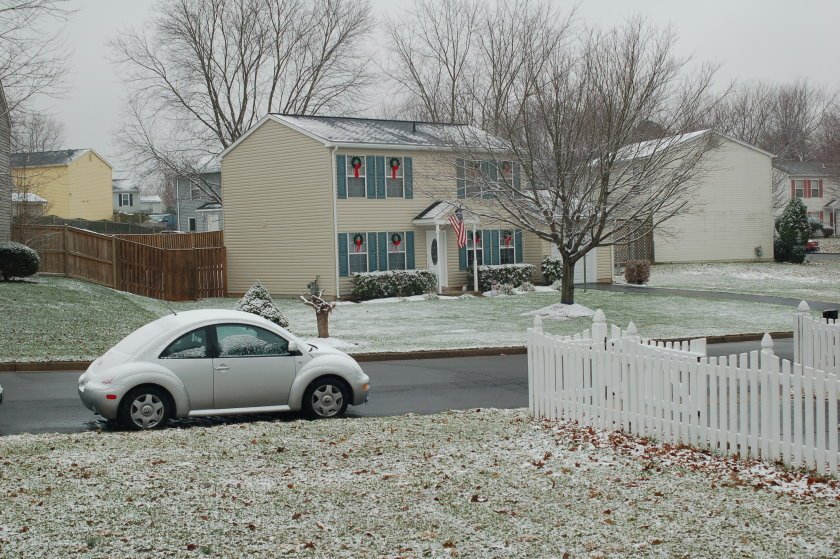 Question; What single thing can shut down entire cities, sends governments into closed door huddles, activates emergency response agencies, and sends people out into the streets in blind screaming panic?

Well, okey, but Godzilla pretty much hangs out around Tokyo. No, I’m talking about the first snow of winter.

We had a very warm autumn and I was seriously hoping we’d have a warm winter. No such luck. It turned cold late last week and last night we heard the dreaded prediction “Snow.”

Sure enough, I received a call from my co-worker 7:45 this morning. He was coming in from the western side of Virginia where it was already snowing heavy. He reported that all traffic was at a near standstill. Another co-worker coming in from Maryland reported that traffic was at a complete stop, and he was giving up and going back home. meanwhile, my co-workers who live in downtown D.C. reported there was a dusting of snow there, but not so bad. They use public transportation anyway, and as of this morning the panic hadn’t shut down the trains. Yet.

I had already planned on taking the day off to do medical stuff, and it seems like this was a good plan. It started snowing here about 9:30, by 11:00 was coming down pretty hard and beginning to stick.

As part of our rounds around Woodbridge this morning, Winnie and I stopped by Home Depot and bought a snow shovel. It’s the first snow shovel I’ve ever bought for myself, a result of cleverly living in warm climates.

Until now. I’m so thrilled.

When Technologies Collide : A family story that could only happen in first world nations.
A Song For This Winter : A musical interlude for a winter’s day.
Important Disaster Planning Information : Important public service information for surviving a disaster. Seriously.